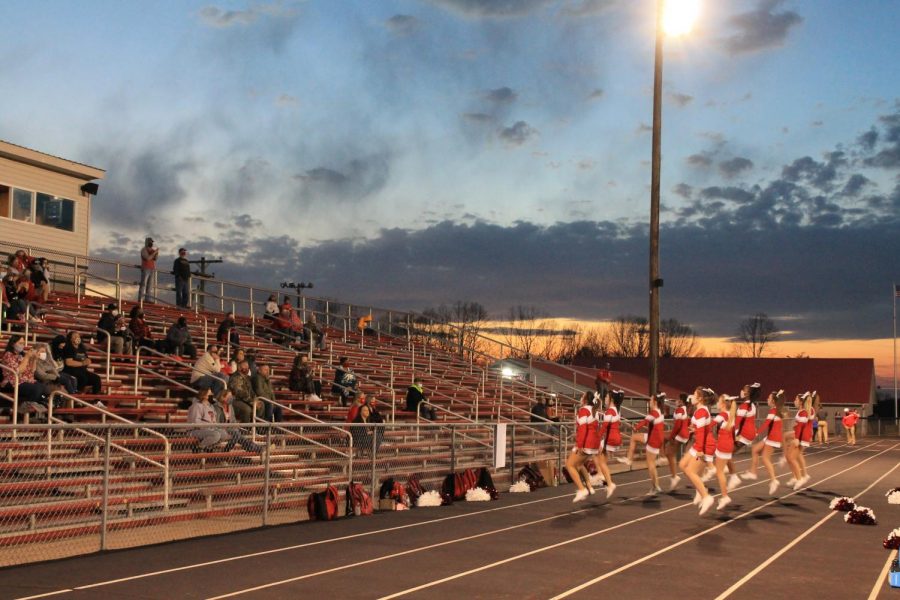 The “fall” sports season came to an end at the end of April. Many fall athletes were excited to have a season at all after the postponement of fall sports and the cancellation of winter sports in Pittsylvania County. While following mitigation measures, four Tunstall teams were able to have at least part of a season.

Following an incredible regular season including an impressive senior night win against Bassett, the Lady Trojans ended their regional bid in a home game against Northside. The game came down to the final points after the Trojans rallied back from down 0-2 to a final 3-2 loss 15-13 in the final set.

The Trojans were without anchor player, setter, KK Stevens after a season ended injury to her foot on Senior Night. Stevens tore her ATL, PTL, and has several other pulled muscles in and around her ankle. After four years on varsity, Stevens had to watch her teammates from the bench. Her replacement was sophomore Gaby Elliott.

“I told Gaby I was her biggest fan and not to feed into the pressure she was under, especially with that being a regional game,” Stevens said.

With the team being made up of mostly seniors, the Lady Trojans plan to have underclassmen step into some key roles next year.

“I can’t believe that it’s over, but I am so thankful to and blessed to have been part of such an amazing team with amazing people,” senior Brooklyn Owen said.

On Monday, April 12, top regular-season performers from the golf team traveled to Lord Botetourt for their regional golf tournament. Karington Brooks, Elliot Jones, Patrick Snow, and Cole Abercrombie were the picks to advance to the 2021 regional tournament.

“It was nice to get to have a final season and have closer. It really wasn’t much different since golf is socially distanced already,” said senior Karington Brooks.

“I didn’t have the performance that I wanted this season, but that is the thing about golf. You can still enjoy yourself,” Brooks added.

The results from the tournament were as follows: Brooks 96 and Snow 98 to lead the Trojans. Elliot Jones finished with a 112, Jackson Jones with a 121, and Cole Abercrombie with a 123.

On Thursday, April 15, 2021, the THS cross country teams traveled to the Smith River Complex to participate in regionals.  For the girls, junior Sophia Hearp came in 16th place with a time of  22:08.  For the boys, senior Ashton Weaver came in ninth place running 17:06. Overall, the girls placed eighth, and the boys placed seventh. Not only did the team have to prepare themselves physically or regionals, but mentally as well.

“It was more of a mental preparation than anything knowing it was our last high school XC race, but my team and I all agreed we were going to go out hard and enjoy every minute of it together,” said senior Savannah Reid.

While some athletes may get nervous with a lot of competition, junior Charles Hearp believes it was a motivating factor. “There was so much more competition than any of the other meets because there were 9 schools instead of just 2 or 3, but the competition helped me push harder and was a good thing to have,” said Hearp.

“I feel like everybody did very good, we have a very young team, so it looks good for the future of the team,” said senior Ashton Weaver

Many runners have now set their sights on the distance events for track and field’s spring season.

The football team ended their short season with a win against Chatham 19-13. After playing against only PCS county schools the seniors felt that leaving behind high school football was bittersweet. The seniors were able to have their long-awaited senior night and also win their game against Gretna.

“It felt great [to win on senior night]! With fewer players than Gretna the odds were against us, but the team pulled through!” said senior Derek Dallas.

Although their season was short, the team was grateful for the opportunity to play. “They gave us a season when they didn’t have to, it was quick and to the point,”  said senior Holden Cassada.

Coach Randy Hunsicker was named “Coach of the Year” in an article written by David Wilson.

Also, the following students were named on the “River City All-District Team”:

Even though “fall” sports are just now coming to an end, the girls and boys soccer team, baseball, softball, and track teams are beginning their spring seasons.