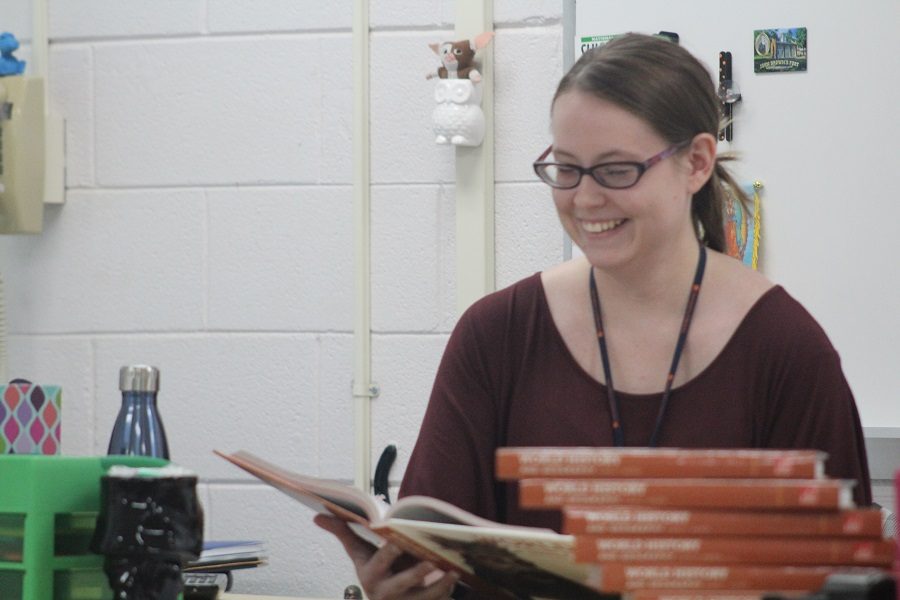 “The world we are in now looks the way it does because of what happened before.”

When you’re zipping past the upstairs A-wing hallway, trying to get from Mrs. Dallas’s English class to Mr. Thaxton’s Algebra II class as fast as possible, you might pass right by one of the quieter figures of the hall.

Ms. Atkins’s class sits in the middle of A-wing, in between Mr. Tittiris and Mrs. Brown. She mostly teaches World History I and Advanced World History I, but teaches other history classes on occasion.

Her life as a student was quite atypical from the norm, attending Chatham High School and paying more attention to her studies than the average student.

“I went to Chatham High School when Mrs. Brown (former principal of Tunstall) was the assistant principal. I was never a sports person, I focused much more on academics. I was in Beta and Chess Club, I took AP US History, and I took 5 years of French.

Atkins also received a background in teaching and education during her high school career.

“I took the Teachers for Tomorrow class in high school and student taught at Chatham. It was pretty awkward teaching my peers, but it was fun.”

Atkins attended the University of Virginia and majored in history. At UVA, she was once again academically focused and chose her studies over the partying, although she did enjoy spectating the occasional sports game.

“One time I ended up walking in on a quidditch match… that was pretty interesting.”

After graduating from UVA, Atkins immediately began teaching. “I spent my first year teaching at Tunstall for the first semester and Gretna for the second. Ever since then, I have taught only at Tunstall.”

Outside of school, Atkins enjoys reading and writing in her spare time. She is currently working on a novel.

“I also like to binge watch Netflix and play with my dog.”

When asked what her favorite part of teaching was, Atkins responded “I really enjoy building relationships [with my students].”