The stars on the wall: History behind the Tunstall Hall of Fame 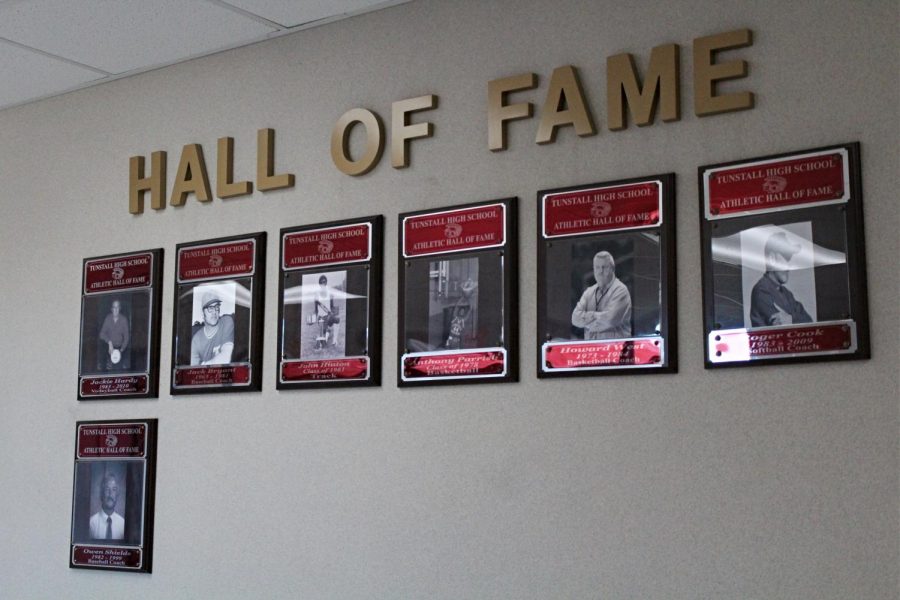 Between the doors to the gym and the concession stand there is a wall filled with plaques. These plaques are the members of the Tunstall Hall of Fame. These seven coaches or athletes have left an impact on the Tunstall athletics. Their names are Jackie Hardy, Jack Bryant, John Hinton, Anthony Parrish, Howard West, Roger Cook, and Owen Shields.

Here are their stories on how they made it into the Tunstall Hall of Fame.

“Anthony is the best basketball player THS has ever had and there’ll never be another like him,” was said by the yearbook staff in 1978 about star basketball player number 44, Anthony Parrish. Anthony played for the Trojans all four years, in his last season he lead the team to an 18-2 season and a Piedmont District Championship. He won many awards during his time at Tunstall such as Most Valuable Player for the basketball team.When he was apart of Tunstall’s first tennis team he won most improved. Other than winning awards, he also broke and set many records like, career points (1772), most points in a season (546), most rebounds a season (196), career rebounds (890), and most field goals in a season (296). He is also one of the only athletes from Tunstall to be nominated to the McDonald’s All-American Team. He left such a great legacy at Tunstall that at the end of the 1978 season they retired his number 44 jersey permanently.

John Hinton was one of the fastest men ever to be apart of the Tunstall Trojans track team. He broke and set many records for Tunstall and at the state level. He broke the state record in the mile run (4:07.6), 880 yard run (1:53.5), and the 1600 meter dash (4:07.6). For Tunstall he broke the records for the two mile run (9:25.0) and tied with James Harris in the high jump at 6’4”. Hinton also competed in the 1980 Junior Olympics program and advanced all the way to nationals in Santa Clara, California, in the 1500 meter dash. Because of John’s accomplishments, he was named to the National High School Track All-American Team.

This legendary Tunstall basketball coach led the program for more than 10 years, from 1973 to 1984. He coached many phenomenal players like another hall of fame inductee Anthony Parrish. His all time record was 178 wins and 70 losses. He brought the team to many appearances and title victories. Howard brought Tunstall two regional championships and four regional appearances. He also lead them to five regular season titles. Other than coaching basketball, he was apart of the football program throughout the 70’s.

Jack Bryant started the baseball program in 1965 and coached all the way until 1981. He lead the baseball team to 10 district championships, two regional championships, a state runner-up in 1972, and a state championship in 1976. “What stands out to me about Coach Bryant is the amount of respect his players have for him,” Mr. Shelton said. The impact Bryant left is an expectation of excellence for the baseball program each and every year. “He taught us to expect to win and never accept losing easily. He expected us to execute the fundamentals and to do the little things right,” Mr. Shelton said. Coach Bryant also played baseball professionally with the Chicago Cubs. Other that being inducted into the Tunstall Hall of Fame, he was also inducted into the Pittsylvania County Sports Hall of Fame and the Danville Sports Hall of Fame. He left such an impact on the baseball program that the baseball field is named after him.

Owen Shields took over the baseball program after Jack Bryant in 1982 and coached until 1999. He lead the Trojans to seven district championships, one regional championship, and a state championship in 1994. Shields led the team in the 1994 season to a 26-0 record, the only undefeated team Tunstall baseball history. Coach Shields had four players who were drafted professionally: Ed Fulton, Eric Owens, Bubba Scarce, and Kris Law. One of his major accomplishments was starting the Pittsylvania County Youth Baseball League with his wife Jean. Because of this they were both inducted into to Pittsylvania County Sports Hall of Fame. “What stands out to me about Coach Shields is how he instilled in his players to take pride in wearing the Tunstall baseball jersey. He had a fierce competitive nature that translated to his players.” Mr. Shelton said. Sadly Coach Shields and his wife both passed away, but their memory lives on for what they did for the youth of Pittsylvania County.

Coach Jackie Hardy coached many sports from 1983 to 2010 but eventually specialized in volleyball. He won 386 games and lead the team to and won 11 district championships. He coached many people such as one of our teachers Ms. Sonya Stowe. “Playing for Coach Jackie Hardy was a great experience. Our team always felt like a family.” Ms. Stowe said. Coach Hardy left a lasting impact at Tunstall for his players, his students, and his colleagues. “He usually had a kind word to say with a smile or a laugh and great stories to tell about his teams,” Ms. Stowe said.

Roger Cook started the Tunstall’s first softball program in 1983. He wanted the female athletes in the community to have an opportunity to play the sport at a higher level. He coached for over 20 years retiring in 2009. He lead the Trojans to 19 district championships. “Playing for Mr. Cook was wonderful,” Mrs. Adrian Nester said, “He was no-nonsense. He was tough at times, and he had high expectations. We wanted to make him proud,” Mrs. Nester said.  Cook impacted the female athletes of the school and of the community for generation to come.