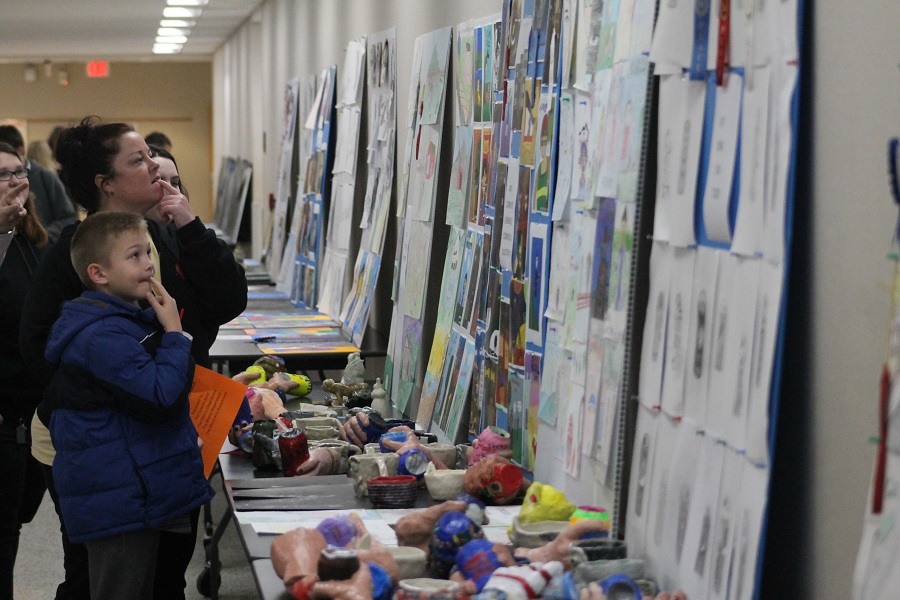 Mrs. Scott and her son looking at art (Asa Herndon)

Mrs. Scott and her son looking at art

On Friday, November 30, students and parents alike gathered into the auditorium for the annual Fall Arts Showcase. The event is held every year towards the end of the first semester to show off the talents of the art, band, chorus and drama classes, and also serves as an opportunity for underclassmen to explore possible classes to take in the future.

After a while, the auditorium doors were officially open and the event went into full swing with the Trojan Vanguard Marching Band’s award winning show, “The Pyramids of Egypt.” Unlike previous shows, the band was able to perform on the auditorium stage and not in the gym. Although the otherwise mobile show was performed while standing still, the show was still positively received by the audience.

“This year’s show was one of my favorites, by far” said junior Chloe Adkins, “the ending is my favorite part because it’s so upbeat.”

After the band had performed, the chorus club took the stage and performed an arrangement of Christmas carols. The songs performed were White Winter Hymnal Alan Billingsley; Riu, Riu, Chiu by Linda Spevacek; Christmas Time Is Here by Steve Zegree; A Holly Jolly Christmas by Greg Gilpin; and Christmas…In About Three Minutes by Mark Weston.

The Drama one act play cast closed out the night with their play, “This Side of Heaven”, which won regionals and was nominated to advance to state level competition. The audience enjoyed the performance, laughing the whole way through and giving a standing ovation at the end.

The cast left on Sunday, December 2nd and performed in competition the next day, Monday, December 3rd. The cast won the state competition with senior actors Mary-Catherine Jones and Camron Beale were awarded with Outstanding Actor awards.

Overall, the night was a spectacular display of talent and passion from Tunstall’s artistic classes. Though it was bittersweet for the senior performers, they were able to enjoy competing one last time and inspiring others to follow in their footsteps.