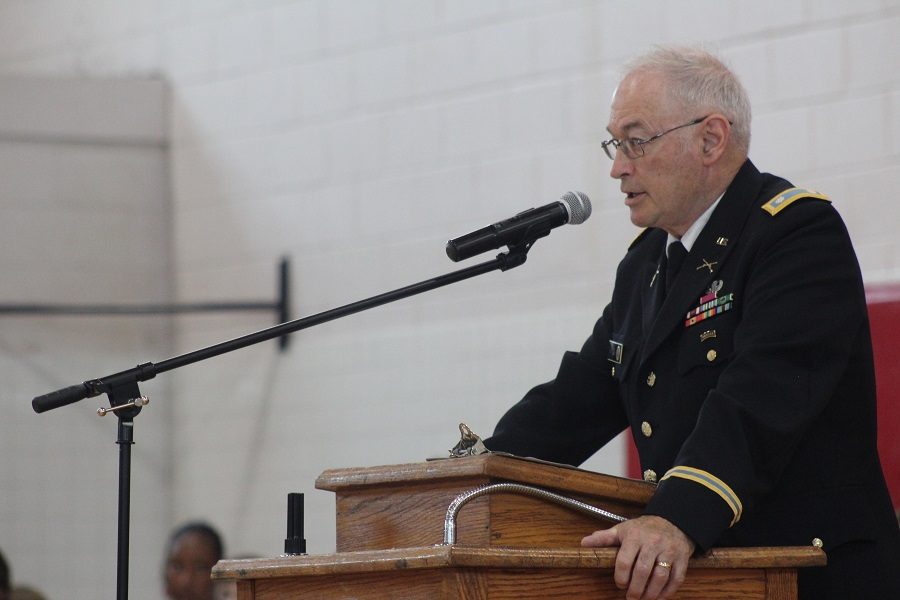 Lieutenant Colonel David King lived the majority of his life moving from country to country or state to state doing what he loves the most: serving his country. His time serving Tunstall High School as the JROTC instructor is coming to an end, but service will remain a cornerstone of King’s life.

Colonel King was born and raised on Lake Erie in Pennsylvania. He strived to be accepted to Virginia Military Institution his senior year of high school. Even though he had never even visited the campus, when he didn’t get accepted, he was devastated. He wrote a letter to the school to explain how badly he wanted to get in and because of that he was accepted. Before coming to VMI, he thought that he could get by just knowing how to say “Yes, Sir” and “No, Sir”, but that ended up not being the case.

While Colonel King was at VMI, he learned a lot of discipline and he got in shape for the military. He joined the wrestling team at VMI, where a WWll Marine Crops veteran was his coach. Later on after VMI, he went to airborne school where he learned how to jump out of an airplane.

He originally didn’t plan on staying in the Army, but he looked up to many men in the military.

“I didn’t plan on staying in the Army, but working with these guys who were able to support the constitution even though people were spitting on them, I learned to love those guys,” Lieutenant Colonel King said.

He went to numerous places in the Army such as Germany and Saudia Arabia to serve our country. After he went to Germany, he went back to VMI for 4 years. In Saudia Arabia he gained a lot of respect for the citizens there because he was being well treated.

“This is the best school because we have great students and teachers,” Lt. Colonel King said.

Although King’s time at Tunstall is coming to an end, he will always remember the cadets and the students that he taught. He will miss the cadets, the routine, and all of the great events that THS held. Because of this historical interest in cavalry, he will particularly miss the days when Ms. Amanda Brown would bring her horse to the high school for a combined class lesson.

He has some hopes and wishes for the future JROTC program, one of which is that students will continue to take the program. He wants students continue to take it because it allows them to pursue in many different educational opportunities after high school.

He plans to continue his love for horses and horseback riding through working with the organization Tactfully Teamed Riding Academy. Also, he wants to read more because he has a library in his house full of books that he has not yet been able to read.

Lieutenant Colonel King lived a remarkable life with a lot of stories that are inspiring. He touched thousand of children’s live throughout his teaching career. Even though he is retiring, his legacy will remain at Tunstall High School.