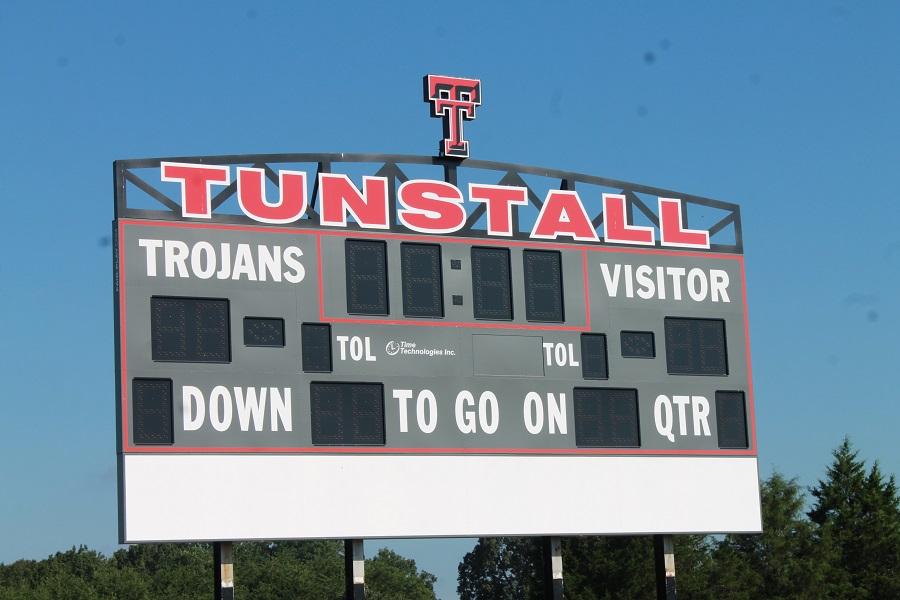 Last Monday afternoon, the golf team placed first overall in the Region 30 Conference Tournament at The London Downs Golf Course. With the win, it marks the fourth consecutive year that Tunstall won in its conference. Lane Pritchett led the team with a score of 80, and also won the conference player of the year award. It is the fourth consecutive year that a Tunstall golfer won the award. Dylan Martin shot a season best score of 82. Martin tied with second individually. Justin Fuller shot an 86, while Will Davis shot an 87.  Next Monday, they will travel to Abingdon to play in the regional tournament.

Tuesday afternoon, the Lady Trojans defeated five other teams in the meet at Halifax County, but fell to Franklin County by a few points. Emily Wallace was the overall winner in the girls division, becoming the first Trojan to place at any meet this season. Ali Hill, Gwen Kallam, Tyler Goad, Jessica Durand and Lia Haskins all finished the race with personal bests.

The boys team almost missed the possibility of forcing a three-way tie for first place along with Halifax and Franklin County; Tunstall was awarded third overall out of six. Luke Vest lead the way for the Trojans as he placed third overall. Zach Gray, Aiden Bork, Allen Ford, Justin McCune, Patrick Hooker, Jonathan Yoder and Adam Searcy all had season best performances. The next meet will be held at George Washington High School.

Tuesday night,  The Lady Trojans fell to the Magna Vista Warriors three games to one. The JV team also lost the Warriors; this time two games to zero.

Thursday night, the Lady Trojans defeated the Bassett Bengals three games to one. Tessa Kaesmeyer lead the team in kills with 15. Molly Hughes was right behind her with 14 while Grey Capozzoli had eight. Saige Johnson and Madison Marlow had  seven. Kaesmeyer also led the team with eight digs and points;  Taylor Ellis had seven digs. Zoey White led with 28 assists and Caitlyn Turner had 18. Capozzoli and Hughes each had four blocks. The Lady Trojans are back in action at home Tuesday night against the Patrick County Cougars.